In the years preceding the formation of Zones Marianne accompanied representatives such as Josie Murphy to committee meetings in Melbourne .Marianne also travelled the State chairing many interest meetings. Since their existence Marianne has attended Zone Meetings regularly and served as a Zone Leader and Zone Secretary. She has demonstrated her commitment to other clubs by attending interest meetings and has started new clubs, such as Ouyen, Stawell, Goldfields, Hamilton, Warrnambool, Horsham, Portland, Heywood Ballarat club.

Of all the Clubs within Zone 12 at present, Ararat is the only Club that Marianne bas not been involved in starting up. She has travelled across the State to assist new Clubs and is a wealth of information and a valuable resource not only to her Club but all Clubs within the Zone. Marianne is always willing to pass on her expertise to new Clubs.

Marianne joined the Board 7 years ago when she saw the need for Regional Representation.

Served as a Regional Representative for 2 years, Deputy chairperson for 1 year and has served as the Chairperson for last 3 years.

Marianne has contributed to Ararat T.O.W.N in many important ways. She has served 23 years as a committee member. Some of the many roles Marianne has undertaken have been:  Leader of the Ararat Club -Has served 9 years in that role (3 x 3 year terms),  Co Leader Served 6 Years  Secretary – Served 2 Years  Weight Recorder – served 1 year

Marianne Wilson joined the Ararat T.O.W.N Club in 1991 and has enjoyed 25 years of continuous membership.

Marianne has served as a valuable committee member for over 23 years in one role or another and has carried out her duties in a conscientious, friendly and helpful manner. Marianne's knowledge of the rules and regulations of T.O.W.N has been of great assistance to all members and indeed many Clubs.  She has proved vital to the successful running of the club and as an active and dedicated member she has assisted many members to achieve their weight loss.  She has represented the Ararat Club on 3 separate occasions as the Club Queen.  We are all extremely proud of, and grateful for, her contribution, not just to our local club but to the TOWN organisation as a whole.

The knowledge, the willingness to assist and the commitment to T.O.W.N and its values make Marianne most worthy to be considered for the Hall of Fame and the Ararat TOWN Club has no hesitation in recommending her for this honour. 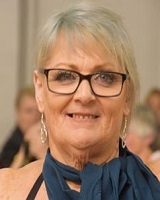