This 91 year old lady first joined Ferntree Gully TOWN Club in 1993 as a founding member.  She reached her Goal weight and Graduated in 1994.

For the last 11 years Grace has maintained her Graduate Status and is due for her 12 Year Graduate award at the end of this Weight year.

In the 11 years since Grace graduated she has been the Ferntree Gully Graduate of the Year Nine times and Runner Up twice.  It is fantastic that Grace remains With-In 0.5kg of her Doctors weight for 48 out of 50 weeks.  She has never won a State place, but we are extremely proud of her.

Over this 11 year period, Grace has attended Ferntree Gully TOWN Club nearly every week except for her two week annual holiday. If Grace is absent we know she is extremely unwell.

Grace has been our Raffle Ticket Seller for that entire time.  Everyone loves Grace, they stop for a chat and then they feel they must buy a Raffle ticket.  We always make a profit on our Raffles!

On behalf of the Committee and all the members at Ferntree Gully TOWN Club, we believe that you would not have a more worthy winner than Grace Gamley. We heartily recommend Grace to the TOWN Graduate Award Submission Committee as a worthy winner of this award for 2013. 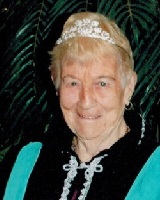