Elwynne joined in October 1995 and from the outset her commitment to the ideal and philosophies of TOWN has been absolute. Newtown is very fortunate to have her as a member and enthusiastically support this submission.

Elwynne was elected as her club's weight recorder at the first elections after joining. This position is a most demanding one, however Elwynne was undeterred by the amount of work involved and began a long and outstanding role as TOWN volunteer.

One year later Elwynne was elected as Club Leader, a position she held for three years. Newtown club had a large membership when she accepted the role and remains one of the largest clubs today. Elwynne was elected zone 2 leader in 1998.This meant that she had to fill the dual leadership roles of club and zone. This was handled with skill, tact and compassion.

In 2002 Elwynne was invited to submit a resume for consideration by the State Executive for the position of State Registrar. A position to which she was elected and held with distinction for that year. The role was very demanding and included much travelling to Melbourne meetings and visiting TOWN clubs to setup and instruct in the use of the new computer system. Having a regional member on the state executive was a very valuable contribution to TOWN and began a change that has enhanced the organization.

TOWN's management structure changed in 2003, this necessitated the election of our first "Chairman", Elwynne accepted this role and has been a remarkable and successful Chairman. The benefit to TOWN has been amazing with a number of achievemnets during her time in this role namely:

Elwynne spends a lot of time in her role as Chairman visiting clubs and has travelled from Portland through to Cobram and even further.

The passion shown for assisting to start new clubs has continued whilst Chairing the State Board, she made major contributions to help Flinders Peak start and then travelled to Castlemaine to ensure they had help to start. Even though she is now claimed by the entire TOWN membership as their Chairman, her abiding loyalty remains with her much loved Newtown club, who are sincere in their admiration of her contribution to TOWN. 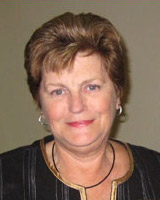