Rosemary first joined Doncaster TOWN Club in June 1982. This was the start of a membership that has been of benefit to all who have had the pleasure of knowing and serving with Rosemary.

Rosemary has held many positions at both club and State level over her many years as a TOWN member and was instrumental as part of the State Executive Committee in bringing forward many changes as the organization grew from 14 clubs when she first joined to the 136 clubs that we have today in 2008.

Rosemary had a vision for a Board with capable members serving as volunteers on a variety of portfolios. This vision has been fulfilled and we are all extremely grateful to her.

A daytime club was needed in the Doncaster area and Rosemary became the inaugural leader of Manningham TOWN Club which opened on 8th April 2003, with the support of Blackburn TOWN Club. Rosemary has been instrumental in developing a supportive and friendly culture within the club and all members have the greatest respect for, and pride in, the achievements of this very special lady. 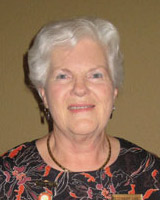