Betty began her weight loss journey with the Doncaster TOWN Club where she graduated in 1985, and she has continuously maintained Graduate status for the past 25 years.

As a TOWN Graduate, Betty has received numerous awards at TOWN level and Club level, which are a wonderful achievement and a testimony to her commitment as a TOWN Graduate.

Since joining TOWN, Betty has given excellent service to the organization. Betty first joined Doncaster, and then with their sponsorship she started the Nunawading Club in 1993. Next Betty noted that a day time club was needed in the area, and therefore sponsored by Nunawading, she started the Blackburn Club in 1994.

As a loyal and committed Blackburn member she arrives early each week, helps set up and is available to speak to any member who is in need of encouragement and support. Betty can be counted on to do whatever she commits herself to doing. 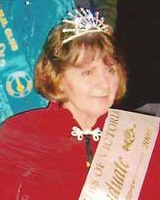